I have never actually had dairy sour cream, as far as I can remember. However, I keep coming across recipes that require it (for example, this cheesecake recipe that I made for our New Year’s Eve celebration).

Vegan sour cream is (probably unsurprisingly?) not something that’s available at your average supermarket in Italy! (Or even in fancy ones.) I’ve tried a number of vegan recipes over the years, and they generally include cashews. I’m especially sensitive to cashew flavor — I like it, but it tastes like cashew, not cream, no matter how much I soak the cashews.

I’ve also tried several variations on quick sour cream, thickened with an acid, and it’s better, but not perfect.

I haven’t had very much luck with rejuvelac or probiotic capsule recipes, either. Eventually I’ll get around to another Cashewbert order, but in the mean time, I need to make cheesecake!

This recipe is cultured with easy-to-find ingredients, and comes out very creamy and tangy and delicious!

This probably works with almond milk, but I haven’t tried it (I have the same issue with almonds as cashews – delicious but tastes like almonds, not cream).

It’s important to find soy milk without additives – the ingredients should be just soy and water. If you absolutely can’t find this, you can make your own soy milk, or try with a soy milk that has some additives. Depending on which additives, it might work. I’ve had okay luck (but not quite the same results) with a brand that has a small amount of gellan gum. 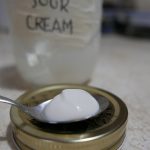