After our epic New Year’s Eve celebration, we needed something a bit lighter. Plus, it’s traditional (in the American tradition, that is) to eat something green on New Year’s Day, and we had some chard in the fridge, so – soup time!

I’ve made some variation of this soup many, many times, and it’s always a hit.

It’s super flexible, but here’s some variations to try: 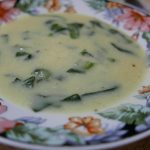