I’m a little hesitant to call this recipe a “frittata.” It’s delicious, yes, but it’s not really very eggy. (Which is my preference, I always hated eggs.)

Anyway, it’s delicious, and super versatile (substitute basically any veggies instead of the potatoes and spinach), and it comes together very easily without a lot of active cooking time. 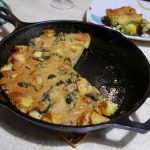